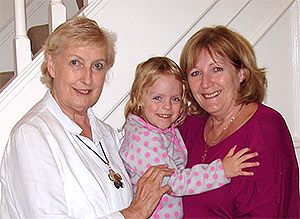 We are deeply saddened by the news that Margaret Harrison, the founder and life president of Home-Start UK, passed away peacefully at her home in Leicester on Sunday the 16 August 2015.

Margaret founded Home-Start International (now Home-Start Worldwide) in 1999 in response to requests for help from people across the world who were inspired by the success of Home-Start UK and wanted to start Home-Start in their own communities.

Home-Start UK reports that more than one million children have been helped since 1973 by the charity that Margaret was inspired to start, and continued to nurture throughout her life. She remained actively involved in Home-Start until her death.

Home-Start Worldwide was privileged to host Margaret as our special guest at the Worldwide Oslo Training Conference in Norway in September 2014. She inspired us as she spoke about how Home-Start began with the simple idea of parents helping parents – a friend who would understand what they were going through, encouraging them and helping them to feel more confident as parents, help them to cope with the everyday stresses that life can bring and give their children the best possible start in life. Margaret stressed the importance of helping families to have fun!

Margaret was an inspiration to many who started Home-Start in a new country and was always enthusiastic and excited at the prospect of more families receiving Home-Start help.

People often remarked that Margaret made you feel special – the warmth and interest she showed to everyone she met will be sorely missed by all those that knew her. Home-Start Worldwide extends its deepest condolences to her husband Basil, children Jane, Clare, David and their partners, and her grandchildren Rhianna, Laura, Oran and Rowan.

Back to the news